How to Figure Out Your Tax Bracket for 2020

Knowing which income tax brackets you land in can help you plan ahead and potentially payer less in taxes. Here’s how tax brackets work and which federal tax bracket applies to you.

Taxes are due April 15th every year, but you’re allowed to file as early as late January. Your income documents, such as W-2s and 1099s, should be mailed by January 31, but some companies take longer.

You’ll want to wait and make sure you’ve received all the necessary tax documents before you file. Otherwise, you may have to submit a correction, which can be a headache.

You don’t have to file taxes if you make less than $12,200 annually, but in that case, you may end up getting a refund if you do file.

Each of these four categories has slightly different 2020 income tax brackets, so make sure you’re reading the right column to figure out which income bracket applies to you.

The U.S. has a progressive tax rate system, which means that people who earn more will pay more in taxes, relative to their income. One common misconception is that people with high incomes pay an overall higher tax rate.

Those who are in the highest brackets don’t pay that tax rate on all of their income, but only the income that falls into that bracket. This means that if you’re in the 24% bracket, only the income you make above the 22% bracket of $84,200 gets taxed at 24%.

Suppose you’re married and file jointly. Your combined annual income is $106,000. You’d fall into the 22% tax bracket. With the progressive tax rate, the 22% is not applied to your entire income.

This is why people are still incentivized to make more money. Even if they jump into the next tax bracket, only a small portion of their income will be taxed at that rate.

Your tax bracket is based on your adjusted gross income (AGI), not your base salary.

Related: Do I Have to Pay Taxes on Bank Account Interest?

Your adjusted gross income (AGI) is one of the most important numbers you need to know. It’s your gross income minus some of your tax deductions and is a measure of how much of your income is actually taxable.

Calculating your AGI is fairly simple. The first step is to add up all of your various income sources including salary, dividends, capital gains, alimony, interest received, rental income, and retirement distributions. Any source of income that you bring in counts towards your gross income.

Then, add up any eligible deductions and any pre-tax retirement contributions you’ve made. These include traditional 401(k) and IRA contributions, 529 contributions, and any tax credits. You’ll subtract those from your total income to get your AGI.

Once you have your AGI, you can determine your federal income tax bracket. 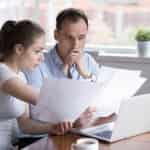 Do I Have to Pay Taxes on Bank Account Interest? 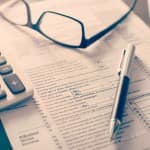 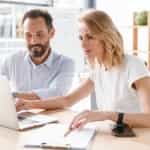